Dr. Immerman moved to Eau Claire and started Evergreen Surgical in December of 1981. His practice has now grown to its present size of five general surgeons. Before moving to Eau Claire, Dr. Immerman received both his undergraduate and medical degrees from Northwestern University in Chicago. Following that, he completed a five year residency in general surgery at Northwestern University. As part of his surgical training, he completed an American Cancer Society Clinical Fellowship in Surgical Oncology at Evanston Hospital in Evanston, IL. Dr. Immerman has published papers on cancer of the breast, lung, pancreas, parathyroid glands, and skin; and more recently on pilonidal disease. He is board certified in General Surgery by the American Board of Surgery, and is a Fellow of the American College of Surgeons. He currently is chairman of the Performance Improvement Committees. He is also on the board of the International Pilonidal Society, and has spoken there on his experience with pilonidal disease on two occasions.

He is the founder of the of the OakLeaf Medical Network which was created in 1993 to allow patients and physicians in the Chippewa Valley maintain private practice as a health care option. He was the CEO of the OakLeaf organization from 1993 to 2006, and was the driving force behind the creation of the OakLeaf Surgical Hospital. In 2016, he was Sacred Heart Hospital’s “Physician of the Year”. “Dr. Immerman is absolutely passionate about providing the very best care to our patients,” said Julie Manas, president and CEO of Sacred Heart Hospital.

Dr. Daniels and his wife, Amelia, have four young children. He is involved with the American Youth Soccer Organization (AYSO) as a coach. He is very involved with his church and numerous other community organizations such as the Eau Claire Children’s Museum and the YMCA. Dr Daniels and his family enjoy traveling together and he and his wife share a love for fitness, yoga and running. He has run 21 marathons to date including being a two-time Boston Marathon finisher.

After receiving his undergraduate degree from Iowa State and his M.D. from the University of Iowa, Dr. Wogahn completed a five year General Surgical residency at the University of Missouri affiliated St. Luke’s Hospital program in Kansas City. In addition to his training in general surgery and trauma, Dr Wogahn received extensive experience in vascular surgery. Dr Wogahn has published clinical research papers on vascular problems, shock, bowel obstruction, nutrition and trauma. Dr Wogahn is board certified in General Surgery by the American Board of Surgery.

Since joining Evergreen Surgical in 1995, Dr Wogahn has developed a very active vascular surgical practice in this area of Wisconsin. In addition to practicing in Eau Claire, Dr Wogahn also sees patients in Durand.

Dr. Wogahn is an instructor in the Family Medicine Resident Teaching Program and was awarded the “Outstanding Newcomer Award” for teaching in 1996. He also lectures for the Emergency Medical Training Programs at Sacred Heart and Chippewa Valley Technical College. He is the President of the medical staff of the OakLeaf Surgical Hospital in Eau Claire.

Since 2000, Dr Wogahn has traveled to Ecuador on several occasions with a group of medical personnel from Eau Claire to share his time and surgical abilities with the Ecuadorians.

Dr. Wogahn was born in Cedar Rapids, Iowa and raised on a farm north of Marion, Iowa. He and his wife Kristin have two children. Dr Wogahn’s leisure time interests include aviation and reading.

Dr. Andrew is our most recent associate. He graduated from the University of Toronto, with a Bachelor of Applied Science with Honors, having majored in Chemical Engineering and minored in BioEngineering. He earned his medical degree with honors in research in 2011 from Northwestern University, Feinberg School of Medicine in Chicago, IL. He completed a five-year residency in General Surgery at Guthrie/Robert Packer Hospital in Sayre, PA. Dr. Andrew then completed a Bariatric Surgery fellowship at the University of Pittsburgh Medical Center in 2017.

Dr. Andrew enjoys working with patients, physicians and other members of the medical staff to provide morbidly obese patients with the highest level of surgical and medical management. He also has an interest in gallbladder, biliary tract disease, and hernias. Dr. Andrew has published manuscripts and abstracts, and has spoken at national conferences on topics such as patient management before and after Bariatric surgery, appendicitis in pregnancy, and management of gallbladder and biliary tract disease. You can learn more about his bariatric surgery practice by following this link.

Dr. Andrew has a 5 year old daughter Alise. He is interested in technology and innovation, including robotics, electronics, and web design. He is a sport enthusiast with special interest in rugby, football and weightlifting. He is also interested in music and is classically trained in piano.

Dr. Roelant, MD obtained his Medical Degree from the University of Maryland School of Medicine and performed his General Surgery Residency at The Ohio State University Medical Center in Columbus, Ohio. He joined the Evergreen Surgical team in August of 2019. His skills encompass all aspects of general surgery including open, laparoscopic and robotic surgery; including abdominal surgery and complex hernia repair. He is board certified in General Surgery by the American Board of Surgery, is a Fellow of the American College of Surgeons, and is a certified Advanced Trauma Life Support (ATLS) instructor. He is certified in DaVinci Robotic General , Bariatric, Hernia, and Colorectal Surgery. His surgical philosophy stresses continuing advancement of surgical care including adopting new surgical techniques and improvements in perioperative care. He is married and has five children.

His surgical interests include complex hernia, gallbladder, appendix, skin and soft tissue, endocrine, colon, rectum, reflux and foregut surgery.  He was awarded the 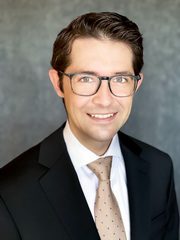 “Gilmore Rothrock Award in Recognition of the Chief Resident with the Most Gifted Hands” 2022, and has published research papers in the use of PTH in Parathyroid Surgery and Intraoperative Nerve Monitoring for Thyroid Surgery.

Dr. Asplund grew up in Northern Wisconsin with his two brothers. His grandfather was a primary care doctor in Bloomer for many years, simply known by the name “Doc”. His father was a well respected general and vascular surgeon in Wausau.

He has a loving family, a three year old daughter and a baby boy on the way. When he not in the office, you may find him, playing soccer, canoeing, hiking, boating, skiing, or just enjoying the Northwoods with his border collie and Irish wolfhound.